Head-to-head
Huddersfield have won eight and lost seven of their 19 league trips to Nottingham Forest, but they have not beaten the east-Midlands club away since a 3-1 City Ground second tier triumph in December 2000.
Forest have won two and drawn three of their last five league engagements with the Terriers.
If three goals figure in this game, it will take the total on display in league matches between the pair to 100. 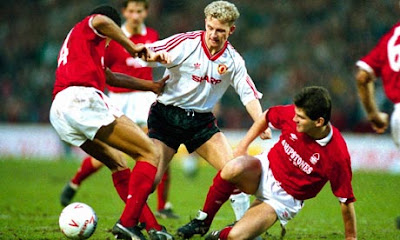 Nottingham Forest
Billy Davies is hunting a first win in his second game back in charge of Nottingham Forest, and the club's second victory in nine Championship games.
Saturday's 1-1 home draw with Bolton was their first point in four outings and left the 11th-placed east Midlands club eight points shy of the play-offs, and seeking a fourth home win out of four against bottom-six clubs.
Forest have not lost a Championship game in which they have opened the scoring.

Huddersfield Town
Having triumphed over Leicester and then succumbed to Wigan in the FA Cup, Huddersfield return to the Championship, where they held leaders Cardiff to a goalless draw last time out.
The Terriers are three places and three points above the drop zone, as Mark Robins takes charge of his first league game needing to improve a record of one win in 15.
The lowest scorers in the Championship (33 in 31) are without victory in seven league games on the road.