Team News:
Porto coach Vitor Pereira says he is relishing his side's Champions League second round match with Malaga. Porto are unbeaten in 19 games and top the Primeira Liga.
Porto striker Jackson Martinez is top scorer in Portugal with 20 goals, along with three goals in six appearances in the Champions League so far. He is nicknamed "Cha Cha Cha" due to his "dance-like" moves on the pitch. 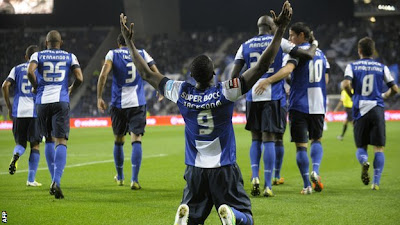 Silvestre Varela and James Rodriguez are available for Porto as they host Malaga in the last-16 of the UEFA Champions League on Tuesday evening.
Winger Varela was ruled out of the 2-0 win at Beira Mar on Friday with a muscular problem but he has shaken the problem off and could feature for Vitor Pereira's side.
Porto also welcome back another winger in Rodriguez, while Steven Defour remains sidelined with a thigh strain suffered in training at the end of January and will not be available.
Malaga coach Manuel Pellegrini has a defensive headache ahead of the trip to Portugal, with neither of his current first-choice full-backs available.
Both Eliseu and Jesus Gamez are out with injuries, leaving Pellegrini with a dilemma at the back.
However, the Spanish side could be boosted by the return of Martin Demichelis in the middle of the park.